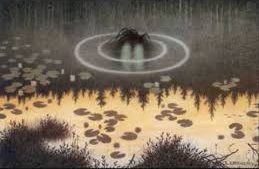 Heiemo og Nykkjen has been gently prompting me to find a place for it in my work for some 15 years. Like all folk tales, it reflects the cultural memory of its place of origin. Nykkjen and I will get together soon, I expect.

‘Heiemo and the Nykkjen’ is a poem / story. The Norwegian folk song ‘Heiemo og Nykkjen’; specifically, the version as performed by Kirsten Bråten Berg, accompanied by Ale Møller, is all you need to know. You can hear this song on the album ‘Nordisk Sang – Songs of Norway’ (New Albion Records: NA 031 CD), or on Kirsten Bråten Berg’s 1993 album ‘Min Kvedarlund’ (Heilo: HCD7087).


Heiemo, the name of the heroine, is, very roughly, pronounced ‘Hie-eh-mow’.

Nykkjen is pronounced quite like ‘Nick-yen’. For those of us who don’t speak Norwegian, the song is the most wonderful way to hear how it should really be said.

Nykkjen, from the old Norse Nykr, is a shapeshifter and master musician who lures children and adults alike into his watery lair by enchanted music, deception and promises of desires fulfilled. He has always been there, waiting in the cold waters of the North.